YOUR LOCAL EXPERTS IN termite CONTROL

Did you know that termite damage costs property owners more than $5 billion every year? In the Pacific Northwest, we primarily deal with subterranean termites and dampwood termites, both of which can cause significant damage to residential and commercial properties. At PestLock, we provide a variety of pest control services, including termite treatments. If you are concerned that your home or office is at risk, contact our team of experienced exterminators to request a termite inspection today. We are happy to inspect your property to determine if there are any active traces of termites, and if there are, we’ll devise an effective, environmentally responsible pest control plan to protect your property.

More than 2,000 species of termites exist in the world, and they can be grouped into three categories: subterranean, dampwood and drywood. Dampwood termites are particularly prevalent in the Pacific Northwest. They are related to cockroaches, yet demonstrate a social behavior similar to that of ants and bees. This is one reason why termites are often confused with ants. 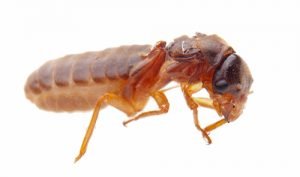 Workers are about 3/16 of an inch long, light-colored, and wingless. They carry on all aspects of the colony maintenance, including feeding the colony and building the nest. Soldiers are approximately 3/4 of an inch long with the head and jaws comprising about one-third of its length. In general, dampwood termites are cream-colored to dark brown. However, soldiers have large reddish-brown to black-colored heads and cream-colored bodies.

Subterranean termites live in colonies comprised of three castes: a king and queen, workers, and soldiers. The king and queen are about 1/4 of an inch long and perform the reproductive functions of the colony. 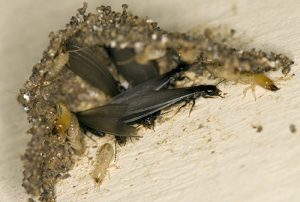 They are often confused with winged or “flying” ants because of their black bodies and transparent wings. However, the antennae of termites are straight with bare, bead-like segments, while those of ants are elbowed. Also, termites have wings that are equal in length with many fine veins, while ants have two pairs of transparent wings that are unequal in length with few veins. Also, ants are distinguished by a dark patch along the outer margin of the front wing.

Termites are most often discovered by home inspectors and seldom by homeowners. While there is no visible difference, an annual inspection will verify that the infestation has been eliminated. Read our blog to learn more about the best way to rid of termites.