YOUR LOCAL EXPERTS IN wasp CONTROL

GET A FREE WASP INSPECTION

Let Us Help Get Rid of Your Wasp Problem

Do you have swarms of stinging insects on your residential or commercial property? PestLock provides industry-leading insect control in these NW Oregon and SW Washington Metro areas and we can help get rid of wasps. Request your free wasp inspection today.

Often mistaken for bees because of their coloring, yellowjackets and hornets are classified as social wasps. While yellowjackets and paper wasps are yellow and black, bald-faced hornets are black and white. All of these stinging insects have elongated bodies with narrow waists, stripes on their abdomen, and cylindrical legs. Their bodies also appear smooth and shiny while the antennae are long and slender. The wings are as long as the body and folded lengthwise when at rest. The stinger is larger than that of bees and semi-cylindrical in shape. Wasps are also more aggressive than bees, inflicting multiple stings to defend their nests.

Social wasps vary greatly in size. Some of the parasitic wasps are so small that several may develop in a tiny insect egg. Other species, including the yellowjacket, bald-faced hornet, paper wasp, and mud dauber wasp, can reach a body length of about 2 inches. All are prevalent in the Pacific Northwest.

After mating in the summer, a yellowjacket queen will hibernate until next spring to build her nest. Once she produces enough workers to take over nest-building and foraging duties, she will remain inside the nest to produce more offspring. Workers then expand the nest to encompass the growing number of young, find food to feed the colony, and act as defenders. They will continue to enlarge the nest until the fall season. Read our blog to learn more about when you should worry about waps near the home. 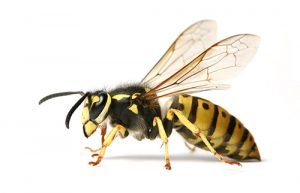 These stinging insects produce very large colonies, with some nests containing as many as 30,000 members. Common locations for nests are near the ground, particularly in sandy, exposed areas, as well as the base of trees and shrubs. The yellowjacket diet consists mainly of flies, bees, spiders, and other insects. They are also attracted to sugars or other carbohydrates such as watermelon. When food becomes scarce and temperatures cool outdoors, they frequently find their way into homes. Once inside, they may nest in wall spaces and attics where they can go unnoticed all season.

Yellowjackets will use their sting to attack prey or defend the colony against enemies. The sting venom is poisonous, containing histamine and other toxins that can dissolve red blood cells. A yellowjacket sting can be fatal to a sensitive person, especially as the victim may be stung more than once by the same wasp. When squashed, a dying yellowjacket will release an alarm pheromone scent to alert other wasps in its vicinity. In less than 15 seconds, any yellowjacket within a 15-foot radius will come to the victim’s aid.

The reproductive and nest building cycles of bald-faced hornets are similar to that of yellowjackets. However, bald-faced hornets are voracious predators of yellowjackets. They also feed on mosquitoes, houseflies, and garden bugs. They prefer to build large, mottled-gray, paper-like nests in trees or shrubs. Occasionally, they will also build nests in attics, crawlspaces, wall voids, and under roof overhangs, decks or porches. The nests are tear-shaped and formed from a mixture of the hornet’s saliva and chewed food. Sometimes the nests may exceed the size of a basketball in diameter. Also, hornets don’t store food in their nests and will hunt for food as the nest develops.

These wasps have a slightly different reproductive behavior than yellowjackets, but they have similar nesting habits to bald-faced hornets. All paper wasp females are potential queens, but only one becomes the dominant egg layer or queen. The other females then take on the subservient role of foraging for food and feeding the young. Paper wasp nests are usually small, containing about 250 wasps. These nests consist of a single comb without a paper envelope around it, and they are built under the eaves of a house and in other protected locations. 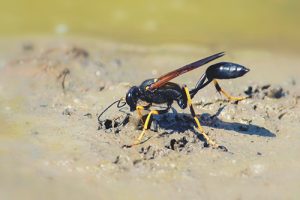 These stinging insects have different reproductive and nesting habits than any of the above wasps. They construct “nests” or brood chambers from mud. The clusters of mud are then attached to the walls of buildings. The female mud dauber collects spiders, paralyzes them with her stinger, and places them inside the mud chambers of her nest. She then deposits an egg on one of the spiders and closes the chamber. Once hatched, the larvae feed on the paralyzed spiders, then pupate. Adults emerge from their mud chambers a few days later.