Moisture ants have elbowed antennae and are about 1/8 of an inch long. The thorax and abdomen are joined by a narrow pedicel, giving a waist-like appearance. The front pair of wings is noticeably larger than the hind pair. 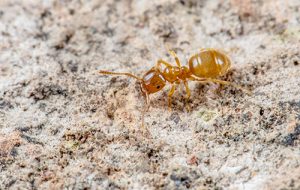 Moisture ants have two distinct castes: workers and reproductives. The workers are the smallest members of the colony and they are wingless. Their eyes are large in relation to their head size. Colors range from brown to very dark reddish-brown, almost approaching black. Workers also emit a strong, formic-acid odor when disturbed.

Queens are about 1/4 of an inch long and lose their wings soon after mating. They are the largest members of the colony. In addition to large eyes, queens also have ocelli, or fake eyes, and a large abdomen for egg production. Male reproductives are similar to the queens, but they are smaller with a normal abdomen. Unlike queens, they retain their wings after mating, which is their sole function.

Moisture ants, or cornfield ants, are considered wood-destroying insects. This is because they require a large amount of moist, rotting wood for nesting purposes. These ants typically swarm in late summer and early autumn for two to seven days, but mating can occur before or during swarming. Shortly after mating, the male dies. The queen then builds a small nest but does not lay any eggs until the following spring. Eggs are very small and come in various shapes. Once hatched, the larvae are white and have no legs. Pupae are soft, white, and motionless. The development time frame from egg to adult ranges from 59 to 127 days.

Eventually, adult workers take over the function of caring for the queen and larvae. They are responsible for building the nest and foraging for food. The ants prefer to feed on sweets, including plant sap and honeydew, as well as dead and live insects. Queens may live more than 10 years, but colonies may persist for 20 years or more. Also, mature colonies may have several thousand workers but only one queen.

Inside structures, moisture ants will nest behind bathtub wall tiles or in bath traps. They may also live in embedded form wood in crawlspaces or under slabs, in and around roof leaks and exposed wooden roof features, and windows. Mature nests in wall voids often fill the void between the studs with carton, which looks like Swiss cheese, except it is brown.

If you are worried that you might have a moisture ant infestation in your Portland home or office, call PestLock for effective, affordable ant control.

Swarming may occur after treatment. Signs of elimination may not be noticeable, but rest assured that a long-term protection barrier has been sprayed around the home.