YOUR LOCAL EXPERTS IN flea CONTROL

We Provide the Portland/Vancouver Area With Economic & Ecological Solutions for Flea Removal & Prevention.

Adult fleas are about 1/8 of an inch long or smaller. These dark reddish-brown pests have three pairs of legs. The hind legs enable fleas to leap as much as 8 inches vertically and 16 inches horizontally. When viewed from the front, their bodies are flat from side to side. This enables them to move easily between the hairs or feathers of the host, as well as within the nap of carpeting. The flea's body is also covered with spines that project backward, which helps them stay on the host while feeding on its blood.

Barely visible to the naked eye, flea eggs are smooth, oval, and white in color. Larvae are roughly 1/4 of an inch long, slender, and straw-colored with brown heads. They are also worm-like and bristle-haired. Each has 13 body segments and chewing mouthparts, but no legs. Eventually, the larvae enter the pupal stage by spinning their own cocoons. Pupae remain enclosed in these silken cocoons, which are also covered with grains of sand, lint, dust, or other particles of debris until they are ready to hatch as adults. 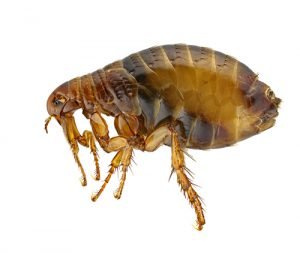 A female flea lays up to 50 eggs per day until a total of 200 to 400 eggs are produced. While the eggs are frequently laid on a pet, they soon fall off the animal into carpeting, beneath furniture cushions, and wherever the pet spends most of its time. Under favorable conditions, most eggs will hatch within two to three days; otherwise, it can take a week.

Once hatched, the tiny, worm-like larvae remain hidden deep in carpet and cushion fibers, as well as other protected areas until they reach adulthood. The larvae mainly feed on adult flea feces (dried blood) found on the pet and in areas where the pet rests and/or plays. Eventually, the larvae transform into pupae, remaining inside its cocoon-state for a minimum of two weeks. However, some pupae may not emerge for several months to a year later.

As the cocoon is resistant to insecticides, adult fleas may appear even after the home and pet have been treated. Fleas also require warm and humid conditions to develop. The larvae are particularly sensitive to temperature and moisture extremes, especially excessive dryness. Thus, flea problems seem to peak in the spring, summer and fall seasons, but they can occur year-round. If you suspect you have a flea infestation in your Portland or Vancouver-area home, contact a flea exterminator as soon as possible.

Since adult fleas primarily live on the animal, not in the carpet, treatment of the pet in conjunction with the pet’s environment is an essential step to ridding the home of fleas. Keep in mind, store-bought foggers do not work long-term; they last only a couple of days and only kill adult fleas.

Fleas are not only found inside the home and on pets, but also out in the yard. While pets usually bring fleas into the home from the outside, shoes or clothes can also transport fleas. Therefore, it is important to treat the outside perimeter of the home in addition to the pet and its environment indoors.

Of all pests, fleas cause the most discomfort and irritation to both pets and people. They account for more than half of all dermatological conditions requiring veterinary assistance. Even a single flea bite to a hypersensitive animal or person may cause intense itching and irritation.

In response to treatment, fleas will act abnormally prior to death. Either more or less will appear, and one or two additional flushing periods may follow. Expect to see some fleas for two weeks or more following treatment. Occasionally, a secondary hatching may occur, but the residue will continue to work. This is because our products not only kill on contact, but act as a repellent by leaving a long-term residue that outlasts the life cycle of the fleas. Also, vacuuming frequently for at least 10 days and up to two weeks will help the newly emerged adults to come into contact with the product sooner.

Let us help lock Fleas out of your home or business