Carpet beetle larvae are about 1/4 of an inch long and wider at the end of the body than at the head. These “infant” bugs appear to be hairy, and they have light and dark brown stripes across their body. The larvae also have three dense tufts of bristles at their rear that extend outward when disturbed. 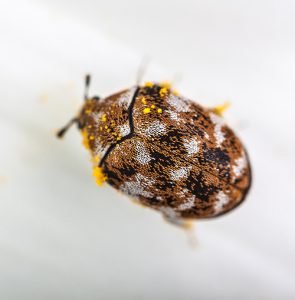 Carpet beetles can mate and reproduce without feeding. Depending upon the species, a female can lay 30 to 100 eggs in lint, floor cracks, or other dark, protected areas. She may also lay eggs behind and under baseboards. It takes about one to three weeks for the eggs to hatch into larvae. At this stage of development, the larva will shed its skin five to 12 times during a nine to 36-month period. Eventually, the larva will develop into a pupa, which usually lasts six to 24 days. Adults may not emerge for another three weeks.

Carpet beetles prefer to live and breed in dark, undisturbed areas, including:

They may also live in air ducts where they like to feed on lint, pet hair, and other bits of debris. Adults are usually found feeding on flowers, but are sometimes seen indoors around light fixtures and windows on the south side of house.

Larvae are most likely seen on walls, along baseboards, or on counters. They feed on various textile materials and items composed of animal fibers including wool, furs, silk, feathers, felt, and leather. Polyester, rayon, and other synthetic fabrics are rarely attacked unless heavily soiled with food stains or body oils. Occasionally, the larvae will also feed on seeds, pet food, or cereal products in the kitchen or pantry.

As the larvae tend to wander from room to room, the infestation can spread throughout the house. Carpet beetles come from an abandoned bird, yellow jacket, or wasp nest, or from a dead mouse or squirrel in the wall. As such, serious infestations of carpet beetles can develop undetected in a home, causing significant damage to clothing, bedding, floor coverings, and other articles. It is very important to locate the source as best as possible so that a professional carpet beetle exterminator can handle the infestation effectively.

In response to treatment, carpet beetles will act abnormally prior to death. The insects will come out of hiding and run across hard flooring or crawl two to three feet up walls to die. After this initial flushing, the abnormal activity should steadily decrease, but it may take three to four additional flush cycles before the beetles under the carpet are completely reached. Keep in mind, our products kill carpet beetles on contact and act as a repellent by leaving a long-term residue that outlasts the life cycle of the bugs.