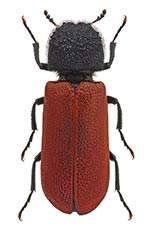 The main difference between all three beetle families is that the larvae of Deathwatch Beetles produce small, pellet-like frass, which is a mixture of feces and food fragments in their nesting galleries. Conversely, True Powderpost Beetles produce frass that has the consistency of fine, talcum-like powder. The frass of False Powederpost Beetles has a more grainy, coarse texture.

The larvae of these various species differ in size and shape, but most are yellowish white and have strong jaws. They are able to construct tunnels with their jaws and feed on the starch and other nutritional compounds found within the wood. They often go unnoticed because they feed beneath the surface of the wood. Feeding tunnels vary in size and shape according to species, and they can be distinguished from other types of insect damage such as termites and carpenter ants. The time required for the larvae to complete their development varies from a few months to several years, depending on the species and the availability of food and moisture in the wood.

Most of the wood-boring beetles found in the Pacific Northwest belong to the family of Deathwatch Beetles. These beetles have caused extensive damage to structural wood in crawlspaces of homes and outbuildings. They thrive in decayed or damp wood that has a moisture reading of greater than 14 percent. They are commonly found in homes with inadequate ventilation and no vapor barriers.

Deathwatch Beetles prefer to feed on softwoods including girders, beams, foundation timbers, and some types of furniture, but they may attack hardwoods as well. Only the larvae feed on wood. Females usually lay less than 660 eggs in cracks and crevices of wood splinters or unfinished wood. Once hatched, the larvae burrow into the wood where they will feed until they are ready to pupate and eventually become adults. During the larval stage, the galleries become filled with small pellets of frass rather than the powdery frass produced by True and False Powderpost Beetles. Adults emerge from the wood by chewing circular exit holes that are about 1/8 of an inch in diameter. Two years may be required for each generation to develop.

True Powderpost Beetles prefer hardwoods including oak, ash, hickory, mahogany, and walnut. The frass is usually found in small piles on floors or other surfaces as the powdery substance tends to fall out of exit holes. Infestations are most likely to occur in the paneling, molding, window and/or door frames, floors, and furniture of these various woods. Also, the presence of tiny, round exit holes made by the emerging adult beetles are sometimes the only signs of infestation in the wood.

More than 1,200 beetle species recorded in the U.S. belong to the long-horned beetle family. Of these, Old House Borers are the only beetles in this grouping that commonly infest homes, causing considerable damage to structural wood. Unlike the other beetle species, they prefer to infest softwoods, especially pine. Females lay about 50 eggs in cracks and crevices in the wood. Once hatched, the larvae will penetrate the wood to feed, but they often stay near the surface. They usually require two to three years to develop in wood that has 15 to 25 percent moisture. They may also take as long as 15 years to develop in very dry wood. When fully developed, the adults will exit the wood by cutting oval holes about 1/4 to 3/8 of an inch in diameter.