Springtails are less than 1/5 of an inch long, wingless, and they have distinctive heads with a hump-backed appearance. They also have a forked, tail-like structure attached to the underside of the abdomen. As the name implies, the appendage functions as a spring to flip the insects four to five inches into the air, especially when disturbed. Otherwise, they move by crawling, followed by periods of rest. Springtails also vary in color, ranging from white to gray, yellow, orange, metallic green, lavender, and red. Some even have a patterned or mottled appearance. The young resemble adults except for size and color. Springtail eggs are spherical. 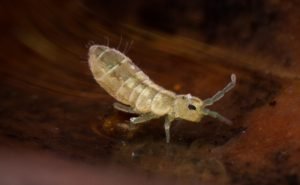 Springtails are year-round breeders. Some can reproduce at temperatures as low as 40 degrees Fahrenheit. They may also breed indoors near leaks, cracks in the exterior, and any area where high levels of humidity are present. The springtail lifecycle is about five to 11 weeks from egg to adult. Springtails will enter the home in times of dry weather or heavy rains, especially when attracted by moisture and organic matter as well as light shining through cracks under doors, windows, and other openings. Once inside, they appear in several places:

Springtails may also be found in wooden windowsills where dampness has caused the wood to decay. Appearing as “piles of soot” in driveways, backyards, and mud puddle surfaces, homeowners are sometimes alarmed by springtails when they are seen outdoors in enormous numbers. This is because they thrive in rich soil, leaf mold or litter, organic mulches, fungi, termite nests, greenhouses, cellars decaying logs, under bark, and on the surface of freshwater pools. They become especially abundant along house foundations or sidewalks, thereby causing a temporary annoyance to homeowners. Springtails are like scavengers, feeding on decaying plants, fungi, molds, algae, or other similar vegetable matter. Occasionally, they are also found feeding on plant roots or nibbling on young plant leaves and germinating seeds in hotbeds. Springtails are also known as “snow fleas” as they are sometimes found on the top of snow during late winter and early spring or as soon as the ground begins to thaw. The white species also live on the surface of ponds and streams and can be found in drinking water from cisterns or wells.

You can count on the springtail exterminators at PestLock to provide industry-leading residential and commercial pest solutions. Our products kill springtails on contact and act as a repellent by leaving a long-term residue that outlasts the life cycle of the bugs. In response to treatment, springtails will act abnormally prior to death, appearing in varying numbers. After this initial reaction time, the abnormal activity should steadily decrease.