YOUR LOCAL EXPERTS IN ant CONTROL

Where To Look For An Ant Infestation:

When Pacific Northwest pests are searching for shelter and a source of food, your home can offer them exactly what they need. The experts at Pestlock can make help you evict your unwanted guests quickly and effectively.

PestLock provides industry-leading insect and ant control in the Pacific Northwest. If you are concerned that you have a house ant infestation, contact our team of exterminators right away. Below, you will find information to help you identify two types of house ants, as well as information on their nesting, foraging, and breeding habits.

Numerous ant species exist in the world today. These include pharaoh ants, ghost ants, fire ants, acrobat ants, crazy ants, and many others. Two of the most prevalent species found in the Pacific Northwest are the odorous house ant and pavement ant. While both may be similar in appearance, ant control experts can distinguish the difference between the two thanks to their nesting and foraging habits. 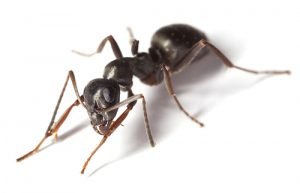 Odorous house ants come in one size only, regardless of whether a worker or a queen. They are about 1/8 of an inch long and dark brown to black in color. Their antennae are comprised of 12 segments without clubs on the ends. No circle of hair appears on the abdomen tips, and the thorax is uneven when viewed from the side. These ants also emit a pungent odor when crushed, hence their name. They will also run about in an erratic fashion with their abdomens raised in the air when alarmed.

Pavement ants derive their name from locating nest areas in or under cracks in the pavement and soil. They are about 1/8 of an inch long and brown to black with pale-colored legs. They have two nodes between segmented bodies, which are covered with stiff hair. The thorax has one pair of spines, and the antennae are comprised of 12 segments that end in a three-segmented club.

Pavement ants also have narrow, parallel grooves on their heads and thoraxes, which are much larger than that of odorous house ants in relation to their body size. Also, unlike the pungent odorous house ants, pavements ants may bite and sting if harassed. They rarely travel vertically, and in most cases, they are found at ground level. Conversely, odorous house ants readily move throughout the home, and they are usually found by the hundreds in cabinetry and sink areas.

Odorous house ant colonies are very large and can range in size from several hundred to more than 100,000 ants. A single colony may consist of hundreds of queens, whereas a pavement ant colony has one queen and an average of 4,000 worker ants. Both colonies consist of two castes: male and female reproductives and workers. Workers are sterile females that are responsible for tending to, defending, and feeding the colony.

As the colonies mature, swarmers will leave the nest primarily from May to mid-July in search of a partner to mate. Males perform no other function than to mate with the queen and die a few days later. The new queens then establish colonies of their own. After she produces the first group of eggs, the queen is cleaned, fed, and cared for by the workers so that she is free to produce more eggs. During the summer, it takes about 34 to 83 days for the eggs to develop into adults. Once a colony has been established, queens will continue laying eggs until late fall, producing a total of four to five generations per year. 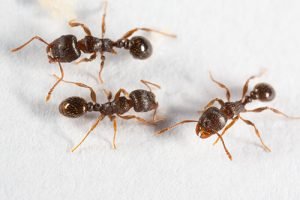 In addition to the parent colony, odorous house ants will develop multiple satellite colonies nearby. These nests are commonly found in the soil adjacent to or in various areas within the home. The latter of which includes wall and floor voids where it is particularly moist or warm, such as:

The satellite colonies remain interconnected to the parent colony via foraging trails. These trails act as trade routes where workers, food, and larvae are exchanged between the various satellite units. In this way, effective ant control for Odorous House Ants requires ongoing maintenance, especially since other queens in nearby nests can be alerted when a single nest has been destroyed.

Unlike odorous house ants, pavement ant nests are typically found under stones and sidewalks, in pavement cracks and open soil near building foundations, or under mulch in landscaped beds. In addition to these areas, colonies can be found under logs, boards, bricks, and patio blocks. While they rarely nest inside, pavement ants often enter buildings in search of food through cracks in the slab walls and expansion joints, as well as natural openings.

As active foragers, pavement ants will set up trails for distances up to 30 feet. These trails can be found along baseboards, beneath the edges of carpets, under toilets, and in other similar areas. Also, workers will readily move to different rooms and floors via plumbing lines. These lines not only act as a “highway” but serve as entry points, providing moisture and heat during the winter.

Odorous house ants and Pavement ants have similar eating habits. Both feed on living and dead insects as well as honeydew, seeds, plant sap, nuts, cheese, bread, and meat. However, odorous house ants are usually found foraging atop kitchen counters whereas Pavement ants are mainly found feeding on or near pet food. Both species forage day or night.

In response to treatment, odorous house ants and pavement ants will act abnormally prior to death. Both species will trail along wall or floor corners, or they may appear on countertops and floors in a frenzy. After this initial reaction time, random new ants may appear during the next 60 days, but this is NOT a sign of re-infestation. Left alone, the new ants will either cross the residue and die or return outside. This is because our products kill on contact and act as a repellent by leaving a long-term residue that outlasts the life cycle of the ants.

Unfortunately, no person or product can keep ants from being active outside. It is their natural environment. As such, ants may be seen on the deck or porch and may come in the front door. However, the protection is still in place around your home and will prevent ants from starting a new nest.

Let us help lock ants out of your home or business