Boxelder bugs have a flat bod, they crawl very slowly, and they will occasionally take flight. A single bug measures about 0.5 inches long and 1 centimeter wide. It is black with three red lines on the thorax (abdomen) and a red line along each side an on each wing. The wings lie flat on its back when at rest. Nymphs are red and gray.

The lifecycle of boxelder bugs begins in early spring when adults lay eggs and produce nymphs in just a few days. These tiny, red nymphs develop into full-size adults by summer, then they mate and lay eggs themselves. Activity of these nearly full-grown, second-generation nymphs is noticed in August and September when they begin to gather in large numbers on the trunks of pod-bearing trees to feed. The bugs feed on the leaves, flowers, and seeds of the Box Elder tree, hence their name, but also the Silver Maple and Oak. 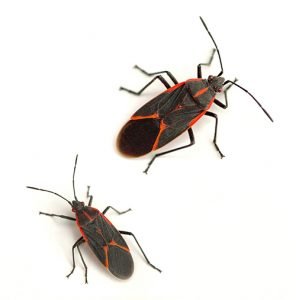 Eventually, the adults migrate from the trees into homes, where the population of these bugs may number into the thousands. Boxelder bugs are harmless, but they can be a nuisance when they gather on the outside walls of homes, looking for a warm place to settle for the winter.

When they gain entry into buildings through cracks around siding, doors, or windows, they usually remain in wall cavities. Fortunately, they do not breed indoors, so there is no danger of infestation. However, boxelder bugs can leave spots on interior furnishings, siding, windows, and windowsills with their droppings. They cause little damage to trees and no structural damage to homes. They do not bite or eat houseplants, nor do they harm people or pets. They are most noticeable during warm winter days and in early spring when they emerge from their hiding spots. If boxelder bug activity is causing you anxiety or frustration, contact PestLock for boxelder bug extermination today.

Before migration season starts in the fall, caulk openings and cracks around the doors and windows. Repair window screens to prevent the bugs from entering your home.

Boxelder bugs found on the outside walls of the home should fall dead upon contact. We use a power spray that also removes the bug’s pheromone scent, making the house less attractive to new arrivals. More bugs may land on the house, but as the residue in the product continues to work, there should be fewer boxelder bugs than found prior to treatment. Unfortunately, there is NO GUARANTEE for boxelder bug extermination due to the bug's unpredictability and ability to fly. However, customers should see a significant difference from just one treatment.