PestLock provides residential and commercial pest control solutions for pantry pests. Our team of exterminators will complete a pest inspection to identify the nature of the infestation and devise an effective pest control plan to lock them out of your home. 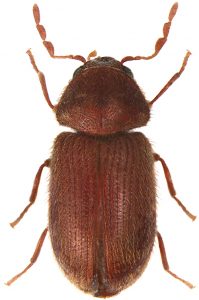 These pests are about 1/10 of an inch long and reddish-brown in color with an elongated shape. The head is deflexed, and the tips of the antennae have three enlarged segments. Faint lines run lengthwise on the beetles’ wing covers. True to their name, drugstore beetles feed on a variety of pharmaceutical products including laxative teas and strychnine. In the home, they may also feed on:

A female lays her eggs on food items. Eggs then hatch within a few days, but the larval period may last four to five months. It takes 12-18 days for pupae to develop into adults. One generation is produced each year in cooler climates. 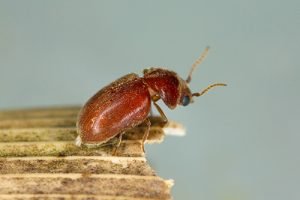 These beetles are about 1/8 of an inch long, yellowish to reddish-brown in color and are oval-shaped. The head is bent downward sharply, nearly at right angles, giving the beetle a humpbacked appearance. Wing covers are smooth, and the antennae segments are uniform and saw-like. These pests prefer to feed on dried tobacco, but they will also eat:

They may also damage the leaves and bindings of books when feeding on paste. A female will lay about 30 eggs over a period of three weeks. The eggs hatch in six to 10 days. The larval stage lasts five to 10 weeks and the pupal period lasts two to three weeks. Each year, three to six generations may be produced. 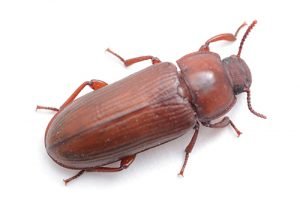 Pests found in flour mills and food storage areas are called flour beetles. They are reddish brown and 1/7 of an inch long. They also have a smooth thorax. They feed on a variety of foods, including:

They do not feed on whole, undamaged grains. Heavily infested food products have a foul odor. Females lay eggs either on food containers or in the food itself. The eggs hatch in five to 12 days. Larvae are cylindrical, yellowish-white and about 1/4 of an inch long. Pupation occurs near the surface of the food mass. Five generations may be produced each year, depending upon temperatures.

These beetles are perhaps the most commonly found pantry pest. Adults are nearly a quarter of an inch long, slender, flat, and brownish red. Their sleek bodies enable them to penetrate the narrow cracks and crevices of poorly sealed packages. They also have six saw-like teeth on either side of the thorax, which is located behind the head. While they may not feed on undamaged, whole grains, they do enjoy cereals, bread, dried fruit, nuts, sugar, macaroni, and seeds.

The female lays anywhere from 45 to 287 white, shiny eggs into food. The eggs hatch in three to five days. Larvae are yellowish-white and less than 1/4 of an inch long. Pupation occurs within the food material. The complete life cycle from egg to adult may occur in 40-60 days. Six generations may be produced each year.

Several species of dermestid beetles feed on dried meats, cheese, dead insects, animal hides, and wool goods. They may sometimes feed on stored foods including grains, seeds, and dried fruit. Adult beetles may be oval or round in shape, mottled gray to black in color, and measure about 3/8 of an inch long. The larvae are similar in size but banded with dark, long hairs. Six generations may be produced each year. 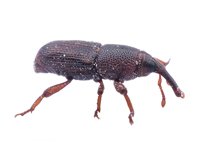 These pests have snouts projecting from their heads and distinct ridges on their wing covers. Adult weevils are dark brown and nearly 1/6 of an inch long. They generally damage whole grains or seeds, but there are sometimes found feeding on nuts and beans.

Females lay eggs on seeds, kernels, or other similar foods. Their eggs hatch in three to seven days. Larvae are white, legless, and they usually feed on the kernel of seeds while inside. Pupation then occurs within the hollowed-out kernels or seeds. Adults emerge in about five to 16 days later. Most weevils produce three to five generations each year.

These beetles have a compact body shape. Adults vary in size from 1/8 to 1/4 of an inch long. They are usually oval-shaped and reddish-brown to black in color. The head is partially visible above the thorax. With their six long legs and long antennae, they often resemble the eight legs of a spider. They feed on grains, seeds, cereals, dried fruits, meats, wool, and hair.

Females lay eggs within their food mass. The eggs hatch in about eight to 12 days. Mature larvae have a cream to tan color and usually curl their bodies when disturbed. Most spider beetles have two to three generations each year. Adults live less than two weeks, are non-feeding, and they chiefly fly at night.

These moths live less than two weeks, fly at night, and are non-feeding. It is their larvae that cause the most grief among homeowners. When fully developed, Indian meal moth larvae frequently wander in search of a place to pupate and as such, may be found on ceilings, walls, and countertops. Occasionally, the larvae will suspend from the ceiling from a single, silken thread.

While coarse grades of flour are preferred, the larvae are often found feeding on whole grains, cereal, dried fruits, nuts, seeds, chocolate, powdered milk, bird seed, and dog food. Foods infested with larvae will have a silk webbing present, especially near the food source, as well as cast skins and frass (fecal pellets). These moths produce about four to eight generations per year.